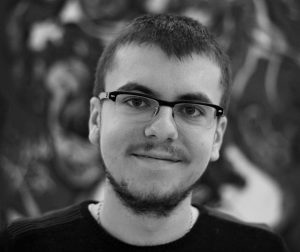 Two decades ago, Cristi Puiu presented his cinematic debut, Stuff and Dough, the film that marked a new beginning for the Romanian film scene, after a period of prolonged confusion which lasted longer than the first decade of post-communism. Puiu’s feature presented a mélange between the finesse of the social observation – I enjoy revisiting this film especially for its extraordinary documentary framework superimposed on the economic reality of the post-communist era, with its small family businesses – and recognizable tropes of established film genres (road movie, thriller). Puiu managed to assemble everything into an aesthetic that anticipated the formula of the so-called Romanian New Wave (RNW), truly accomplished four years later by the same auteur, through the release of The Death of Mister Lazarescu. 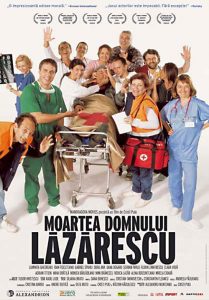 I’ll offer just one example: long dialogue sequences, where lines serve just for filling the time spent on the road, without fundamentally enriching the discovered universe, without moving the action of the film forward in a decisive manner. These characteristics, as well as their immediate consequences – the birth of a true cinematic movement, the awards received in major film festivals, the sharpening and the accentuated hermetically sealing of a formula – are well known. They were documented in detail, once and for all, by Andrei Gorzo in his seminal book Lucruri care nu pot fi spuse altfel (translated as Things that Cannot Be Said Otherwise). This conversation seems old, and there is no place for details here. But it’s worth mentioning that Gorzo did a remarkable job by emphasizing the connections between the options offered by the New Wave and the aesthetic explorations that have deeply influenced post-war cinema, showing that a vision such as Puiu’s does not emerge out of anything, while at the same time drawing an aura around it.

Almost ten years have passed since that moment. When the study written by Gorzo was published, the New Romanian Wave had already started to lose its momentum.  Aurora (2010), the third feature authored by Puiu, embodied the end of the road: no matter how you put it, it was difficult to come with even a more radical vision, so going backwards proved to be the solution, embraced by Puiu himself in his next feature Sieranevada (2015). That being said, interesting things continued to blossom in our cinema industry – look no further than a recent year-end list compiled by Dragoș Vasile for VICE Romania, based on a survey conducted among 10 well-known figures of the Romanian cultural scene that were invited to come up with a personal top 10 of Romanian films picked from the last decade. The list of respondents is less systematic than the one used in a similar inquiry conducted by film critic Flavia Dima in the previous year, which included 50 persons with a film theory background (educators, film critics, etc.) Because Dragoș Vasile chose to keep the individual options of the respondents on display, I will take advantage of the provided information and briefly sketch some personal conclusions.

Once centralized, these preferences tend to become monolithic: somehow unsurprising, the “big” films of the last decade, usually associated with well-known names that made the New Wave achieving cultural prestige in the previous decade (Cristi Puiu, Corneliu Porumboiu, Cristian Mungiu and, on a smaller scale, Radu Jude, who joined the fold some years later), find their place in the higher positions of the ranking alongside films such as Aurora, Sieranevada and a more recent effort like The Whistlers (Corneliu Porumboiu, 2019). 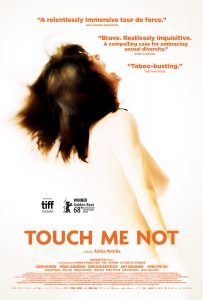 After an in-depth analysis, and this is my intention actually, the titles which were included in these selections share some interesting ideas about the last decade, cinematically speaking. First of all, it has become much harder to make a radical decision favouring one film over another. In other words, shaping a well-defined canon as an answer to the question “What should we withhold from the Romanian Cinema between the years 2000 and 2009?” was fairly straight-forward as to predictions. Nowadays, considering the epigone experiments that drained the NRW, and with other directions that gain more and more importance, the lead board offers a mixed picture, with older and newer approaches sharing the spotlight. There are multiple shifts of direction: first of all, the stylistic shift, because it is more than obvious that a film such as Touch me Not (Adina Pintilie), winner of the Golden Bear in Berlin in 2018, which explored the porous frontier between therapy and cinema, has nothing to do with an artistic product that can be clearly labelled “RNW”, such as Beyond the Hills (Cristian Mungiu, 2012). In a similar manner, the lightness of a „summer-movie” such as Ivana the Terrible (Ivana Mladenovic, 2019) is marks a significant gap from the imposing formalism displayed by Cristi Puiu. Then, as one could observe, the guild is not exclusively masculine anymore: exquisite creative voices such as the ones mentioned above, joined by Ana Lungu among others, bring a sensitivity irrigated by inventive feminism which doesn’t have much in common with Radu Muntean’s agile (but also rigid) thrive of portraying fallen masculinity. Finally, from a thematic perspective, we seem to be leaving behind the drama of the middle-class paternal figure, and the exploration of generic, “universal”, sceneries. Radu Jude reviews the history textbooks from a compensatory perspective towards the marginalized ones, Bogdan Theodor Olteanu investigates the creative youth clusters and sexual minorities. The documentary, finally, seems to be reaching higher and higher ethical standards, as proved by a movie like Acasă: My Home (Radu Ciorniciuc, 2020).

Also – and I’m thankful to a good friend for confirming my intuition –, one could notice a subtle switch in the preferences displayed by Romanian film critics, who seem to be less influenced by the raw idea of a “masterpiece”, a paralyzing criterion that less than one decade before still guided the origin of flagship-movies of the RNW. Of course, now I’m stepping on quicksand, and it would be better to make these remarks from a first-person perspective. I will take advantage of the opportunity to talk about a certain feeling of annoyance with the directors that feel the need to invoke God for each decision occurring on set, or to induce the feeling that the filmmaking process weights as much as a burden and reeks of sacrifice for the team of the film, and of privilege for the spectator. I’m talking, of course, about Cristi Puiu’s school, which had enough popularity among its disciples. But it’s maybe the appropriate context to ask ourselves whether a random long take from Sieranevada is really worth the effort – isn’t it a heavy mannerism that could be spotted from far away? Does the intransigent opacity from Aurora have a deeper meaning, at the end of the day, than a caprice in a shiny packaging – and is it by design superior to a film that preserves the traditional narrative form but innovates through other means?

Therefore, it is important to acknowledge the meaning of the critical gesture that seeks fearless proposals, who would respond to the creative gesture of those who part far from the beaten path paved by RNW, even with the assumed risk of imperfection. We leave behind the decade 2011-2020 without many certitudes, so it’s worth mentioning them: first of all, Andrei Ujică proved yet again to be one of the greatest contemporary documentary filmmakers, with an oeuvre that analyses the past century (film critic Ariel Schweitzer even named one of his articles about him: “The Century of Andrei Ujică”) from the perspective of the official images that composed it, and the slight gaps opened between them, capable of generating knowledge and critical commentary. The second certitude is that Radu Jude is the Romanian director (if not the artist) of the decade, the most fruitful explorer of areas where the Romanian cinema had not ventured before at all. Jude is the embodiment of the above-mentioned ideas: through the large body of work that he produces, he is exposing himself to the risk of being inconsistent, but his strength comes exactly from this relation of immediacy with the present, which in his films leaves a trace of a mediated and nuanced relation with the past. His next film, Babardeală cu bucluc sau porno balamuc, which will be released next year, stands as a statement for his creative force, enough to offer him a well-deserved spot in the nowadays world cinema Pantheon. I know too well that this sort of honour would only irritate him: he would tell me that his practice is alive, unsettled, scolded with the museum – and he would be right, once again.

5 days ago
by Sabina Scarlat

2 weeks ago
by Victor Morozov